The SMB Redirector component implements the client portion of the file-and-print sharing functionality exposed by Windows through Microsoft Networking. The implementation is based on the Server Message Block (SMB) protocol. The SMB protocol allows the client computer to access files on another computer that implements the SMB server portion of the file-and-print sharing functionality, as well as access to a shared printer. The SMB protocol also establishes caches on a client which allow the client to more efficiently satisfy file data, metadata (file attributes, presence or absence of files) and directory enumeration.

With the release of SMB 2.0 in Windows Vista® and Windows Server 2008, three file metadata caches were implemented to speed up the return of the most recently accessed file and directory information. These caches also reduce the number of interactions a client requires with a SMB server for common file browsing operations. This has value in a scenario such as a client browsing a network file directory while connected via a low bandwidth or high latency connection. For common network file browsing scenarios, the default values are sufficient and should not be altered. Changing these cache timeout values can have significant performance implications to many network file scenarios. As each of these caches is designed to reduce the number of SMB server requests, they are important not only in client response time evaluation, but also in overall SMB server scalability and performance.

If changes are deemed necessary to these default values, they may be altered by creating these client registry keys and changing to the appropriate setting. Each cache is independent and controls specific information. It is not necessary to change all of the caches if a change to any one of the caches is necessary, as they operate independently and control different redirector optimizations.The default values were selected for the broadest range of SMB file access scenarios. However these default settings may not be appropriate for all network application usage.

Applications which require a high level of file information consistency across clients which may utilize creation or changing of a file as a notification mechanism to other nodes may encounter delays or consistency issues with these default values. There are other programmatic recommendations for an application to be notified of a change on a file, or directory such as the FindFirstChangeNotification, FindNextChangeNotification, or the ReadDirectoryChangesW APIs which are described within the Win32 and Com Development File Systems documentation on the Microsoft Developer Network. For more information on the specific reference to Obtaining Directory Change, see Obtaining Directory Change Notifications in the Microsoft Developer Network (http://go.microsoft.com/fwlink/?LinkId=187242).

There are three different caches utilized by the client SMB network redirector if SMB 2.0 is the negotiated protocol.

If you suspect metadata caching in the redirector as cause for misbehaving applications, disable the caches in the following order to determine which of these caches is affecting the application. Disabling the File information cache can have significant effect on client performance and show an increase in the number of metadata requests that are sent to the server.

How to Reset TCP/IP on Windows Computers

The Transmission Control Protocol/Internet Protocol (TCP/IP) is the communication protocol used on the Internet. It’s also used on the private networks. In earlier versions of Windows, TCP/IP was a separate optional component that could be removed or added like any other protocol. As far as I recall, starting with Windows XP/Server 2003 TCP/IP became a core component of the operating system and couldn’t be removed. It makes sense to make TCP/IP a core component of Windows because its functionally is especially critical on Microsoft Windows Servers for network operations and Active Directory domain environment. The entire Active Directory architecture is based on DNS hierarchy, which relies on TCP/IP.

There are situations where you may experience a corrupt TCP/IP stack on your Windows Servers or client workstations. This could be due to a malware infection, or it may be caused by the applications running on your computer. Although TCP/IP stack corruption is rare, it causes a major problem because you can’t remove and reinstall TCP/IP anymore. So what’s the solution? Reinstalling the operating system? Well, that’s one option. However, a better option is to simply reset TCP/IP to the default state when the operating system was installed. When you reset TCP/IP, you overwrite the following Windows registry keys.

You can use the NetShell (netsh.exe) utility to reset TCP/IP on any Windows computer, server or client. When you reset TCP/IP, it will rewrite all the important keys in the registry which has the effect of removing and reinstalling the entire TCP/IP stack. The netsh.exe is a command line tool which allows you to monitor and configure networking components in Windows. To run this tool, start the command prompt with administrative credentials and type netsh. Type help, or a question mark “?” without the quote to see the list of commands that are available in NetShell. 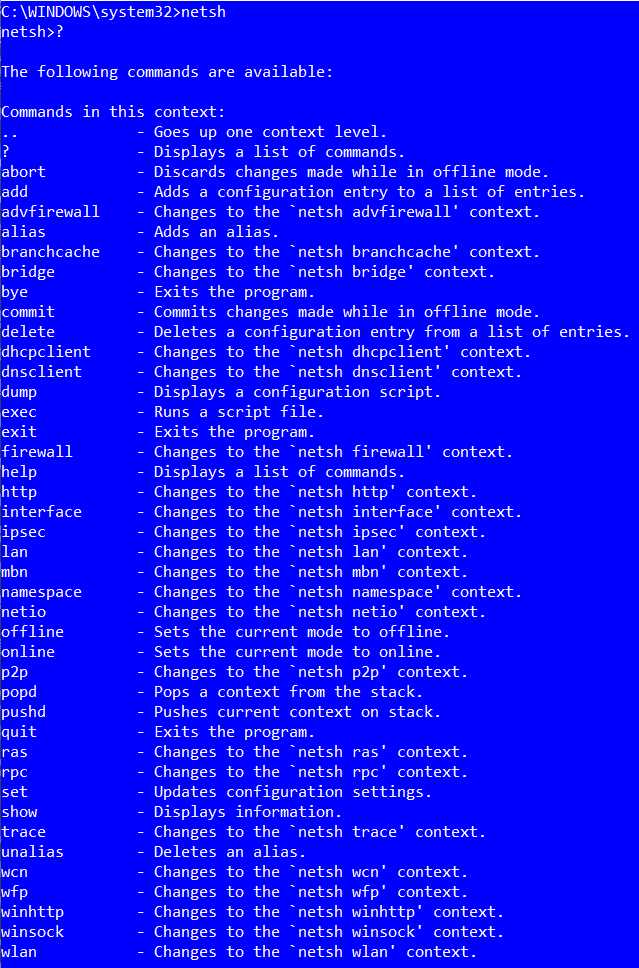 TCP/IP is not just a single protocol, it’s a suite of protocols. Netsh offers the options to manage the interface in context of IPv4, IPv6, and TCP. In Windows XP, the options were available for IP and IPV6, where IP was assumed to be IPV4. There was no option for TCP. Starting with Windows 7, the NetShell utility in all versions of Windows client operating systems has the ability to set the interface context to IPv4, IPv6, and TCP. The same is true for the newer versions of Windows Servers starting Windows Server 2003.

NOTE: By default, Windows computers run both the TCP/IP version 4 and TCP/IP version 6 protocols side by side. There is no harm in running both the protocols. If you were to disable TCP/IP v4, you may not be able to connect to the Internet because not all routers in the world support TCP/IP v6 at this time. If you disable TCP/IP v6  you can run into some serious problems on your Windows network. According to Microsoft, disabling TCP/IP v6 is a very bad idea because it can break certain features and services in Windows. 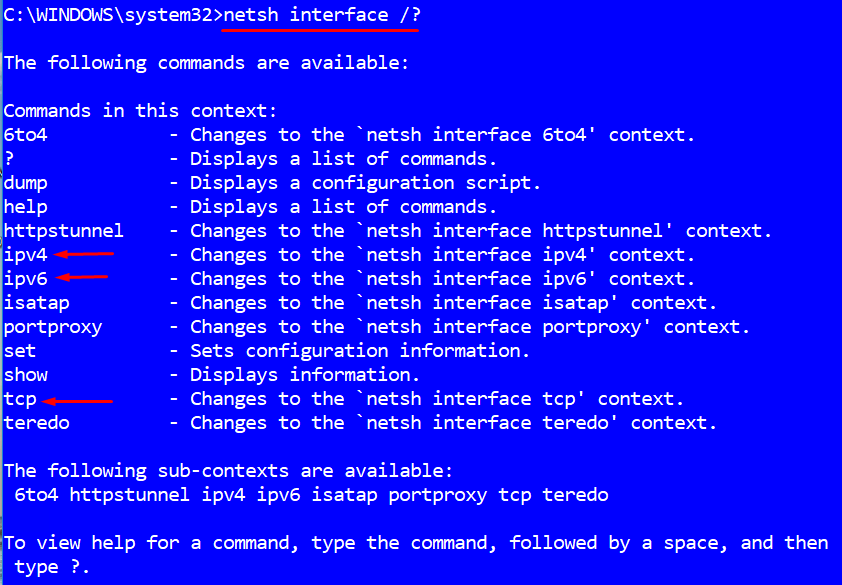 Setting the context means you can take action on the individual components and configure or manage various options on your network. To reset TCP/IP, you don’t need to reset IPv4, IPv6 and TCP individually. According to Microsoft’s article 299357, to reset the entire TCP/IP stack you only need to specify IP as the interface. I know, unlike Windows XP, the IP option is not listed under the available options in the above screenshot, but you can use the following command to reset TCP/IP.

NOTE: You can either type the word interface, or use the abbreviation int, when working with the NetShell utility. 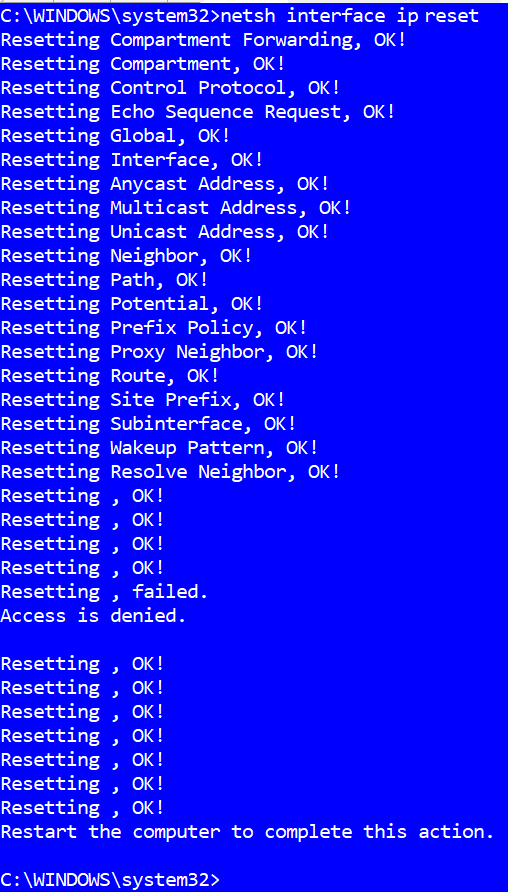 Restart the computer after resetting TCP/IP.

When you have a problem with the TCP/IP stack, resetting is way easier then reinstalling the operating system because there is no easy way to fix a corrupt TCP/IP stack. Although, I have never experienced any drawback by resetting TCP/IP, I won’t recommend it doing it as a hobby. It’s better to do it as a last resort, rather than trying it as your first option. If you have configured a static IP address, which is the case with Windows Servers, you may have to reconfigure your IP address after resetting it. Therefore, it is best to document your TCP/IP configuration before you reset it. If you are using DHCP to automatically configure the TCP/IP settings, which is usually the case with Windows clients in corporate environment and most home computers, then you won’t have to worry about configuring anything. You simply restart the computer after resetting TCP/IP and that’s it.

If for some reason resetting TCP/IP didn’t solve the problem with your Internet or local network connectivity, you may also consider resetting Winsock, which is a programming interface that handles communications between Internet applications and the Windows operating system. Wikipedia defines it as follows:

“In computing, the Windows Sockets API (WSA), later shortened to Winsock, is a technical specification that defines how Windows network software should access network services, especially TCP/IP. It defines a standard interface between a Windows TCP/IP client application (such as an FTP client or a web browser) and the underlying TCP/IP protocol stack.”

Winsock is not part of the TCP/IP stack. However, because Winsock defines the interface between the TCP/IP client application and the TCP/IP stack, resetting Winsock can be helpful in many situations. To reset Winsock use the following command. Make sure you are logged in as an Administrator.

Restart the computer after resetting Winsock.

For the past few weeks, I had been experiencing an issue that has been bugging me. I would spend about 30-60 minutes here and there to try to resolve the problem, but couldn’t dedicate enough time to fix my issue. In this article, I am going to describe my scenario, then share the different techniques I used to try to solve the problem, in case one of the techniques may prove to be helpful to you; and finally share the solution that worked for me. END_OF_DOCUMENT_TOKEN_TO_BE_REPLACED

Security for the Middle Class (684)

Preparing our Youth for Success (589)